This Quarterly Report covers all FTSE100 companies. It includes analysis of all annual reports for years ending on or before the 30 June 2016 and published by 31 October 2016.

This report albeit 6 months old is something to look at as this problem is only getting worse, hence I wanted to share it with you all.

The overall funding position of pension schemes of FTSE 100 companies has worsened over the year covered by their latest annual report and accounts.

Including all pension arrangements, both UK and overseas, whether funded or unfunded, the FTSE 100 companies with the best-funded pension schemes overall were as follows: 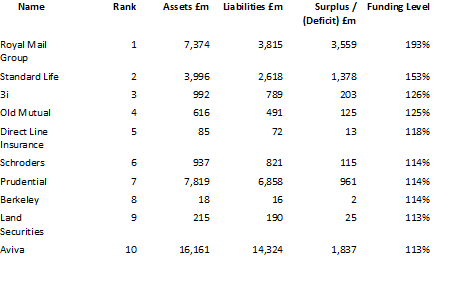 The FTSE 100 companies with the worst funded pension schemes overall were as follows: 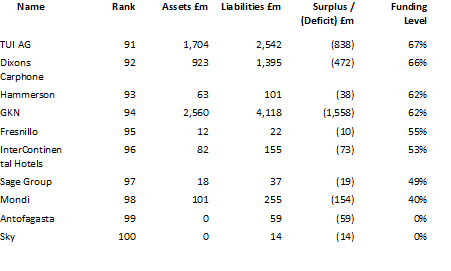 In 2007, IFRIC14* provided new guidance on the recognition of surpluses and the impact of minimum funding requirements. Within the FTSE 100, 18 companies have reported that the restrictions imposed by IFRIC14 have had an impact on their pension disclosures.

The total reported impact for FTSE 100 companies is now £5.6 billion. The largest reported adjustments for IFRIC14 in the FTSE 100 were as follows: 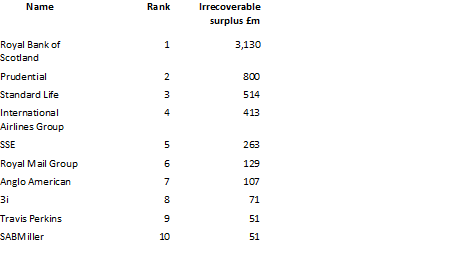 Adjusting these figures up to the quarter-end, we estimate that the total pension deficit in the FTSE 100 as at 30 June 2016 was £117 billion. This is a deterioration of £42 billion from the position 12 months ago.

Legislation over a number of years has clarified that pension liabilities are a form of corporate debt. Despite the fact that there is an increasing weight of opinion from academics and analysts that mismatched investment strategies in pension schemes reduce shareholder value, many companies are still running very large mismatched equity positions in their pension schemes. This has the impact of creating balance sheet volatility, which some academic evidence might suggest flows through to share price volatility.

Inevitably, analysis of mismatching is limited to the information disclosed in the annual report and accounts. Given the bond-like nature of pension liabilities, the allocation of pension assets to bonds gives an indication of the level of investment mismatching that exists. This report refers to investment mismatching in terms of the IAS19 accounting position, where liabilities are being valued using AA corporate bonds; therefore assets other than these bonds will lead to a mismatch.

The FTSE 100 companies with the highest allocation to bonds were: 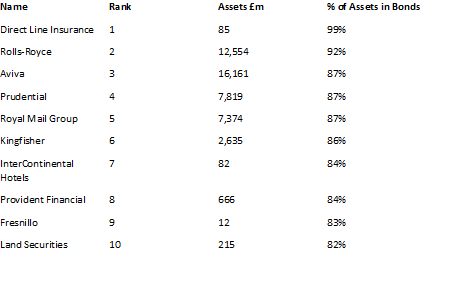 The FTSE 100 companies with the lowest allocation to bonds were: 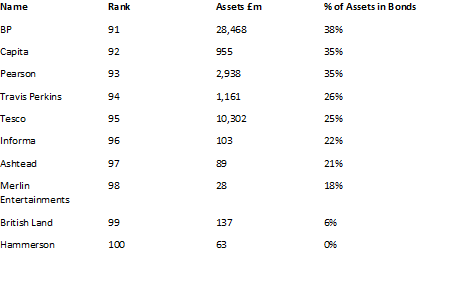 The FTSE 100 companies with the greatest change in bond allocation were: 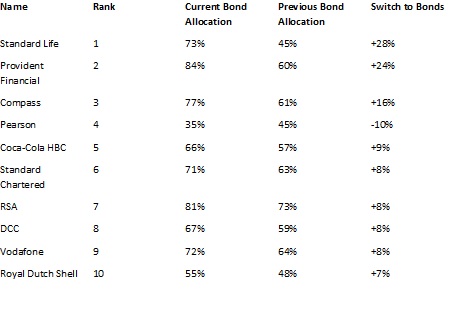 Several companies and trustees are continuing to switch pension assets out of equities into bonds. Standard Life is the latest company to report a big switch, with bond allocations increasing by 28%. A total of 61 FTSE 100 companies have more than 50% of pension scheme assets in bonds. Moreover, company disclosures reveal little of the extensive activity there has been by many companies to use LDI (liability-driven investment) strategies, which frequently make use of derivatives and other financial instruments to improve liability matching.

Overall, though, the average pension scheme asset allocation to bonds is now 61%, which has increased from 59% a year before. This compares to 34% ten years ago.

The FTSE 100 companies with the largest pension scheme liabilities (all those over £10 billion) are as follows: 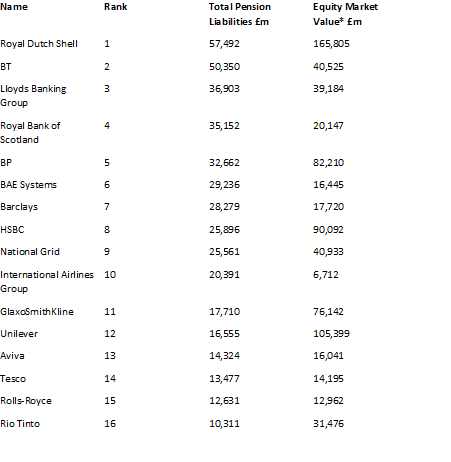 The FTSE 100 companies with the smallest pension liabilities (all those under £100 million) are as follows: 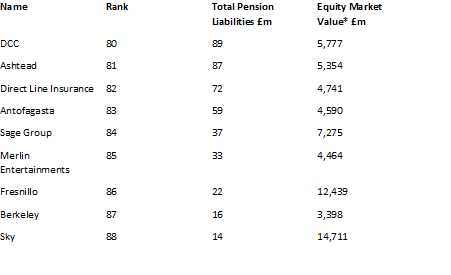 SIGNIFICANCE OF THE PENSION SCHEME IN THE BOARDROOM 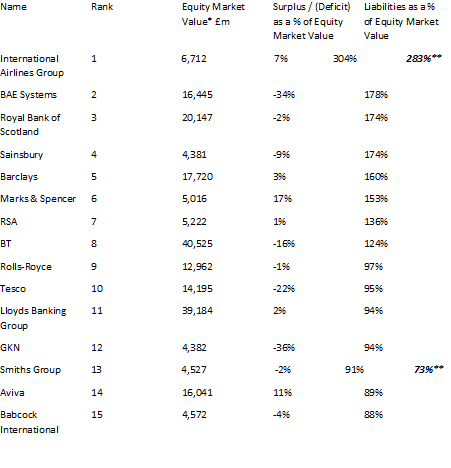 ** These companies’ pension schemes have purchased contracts, which insure part of their liabilities; the figures in italics represent the impact of the liabilities without these insured sections.

A further sign of the significance of pensions in the boardroom is the extent of continuing DB provision to employees. This can be measured by looking at the ongoing spend on DB pensions (the service cost) before any allowance for deficit spending. The FTSE 100 companies with the highest ongoing spending is shown in the table below, together with the previous year’s spend for comparison. 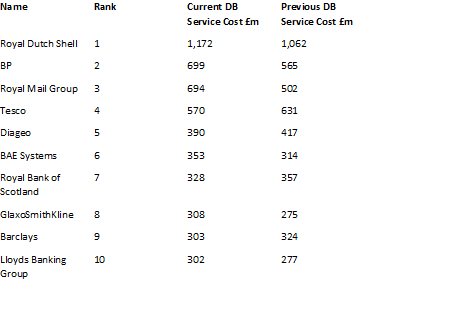 Increasingly companies are reacting to the combination of difficult economic conditions, rising pension costs and increasingly aggressive pension regulations by closing pension schemes to future and even current employees. This decline in total DB pension provision is now apparent in the accounts of FTSE 100 companies, with several companies closing their scheme to future accrual or freezing pensionable salaries. The total current DB service cost is £8.1 billion compared to £7.5 billion in the previous year. However, we estimate that after allowing for the impact of changes in assumptions and market conditions, the underlying reduction in ongoing DB pension provision is approximately 10% in the last 12 months alone. We believe that the next year’s accounts will show that the majority of FTSE 100 companies have ceased DB pension provision to all employees.

IMPACT OF THE PENSION SCHEME ON THE COMPANY’S SHARE PRICE

In the analysis below, the unexpected change in balance sheet position (net of change in adjustment for IFRC 14) is expressed as a percentage of the equity market value of the company. We are not suggesting that the balance sheet impact will translate into a £ for £ impact on a company’s share price (not least because of the impact of deferred tax), but this analysis gives a good indication of those companies most positively (and negatively) affected by their pension schemes in their last financial year.

The FTSE 100 companies most positively affected by their pension schemes were: 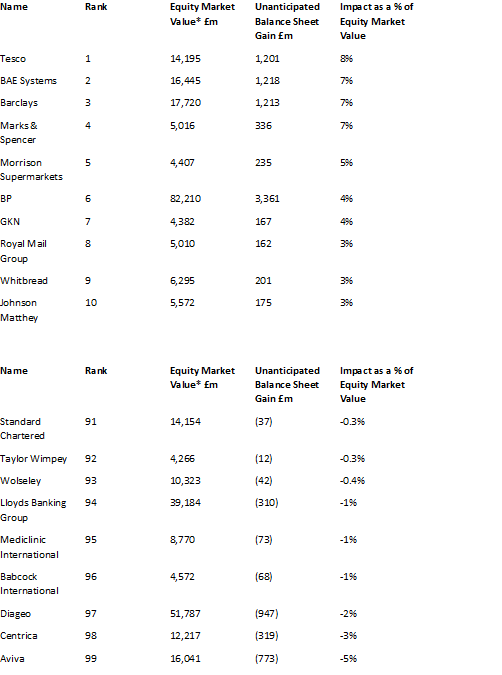 Only contributions actually paid in the relevant accounting year are included in the analysis below.

The FTSE 100 companies who have made the largest surplus contributions to their pension schemes were as follows: 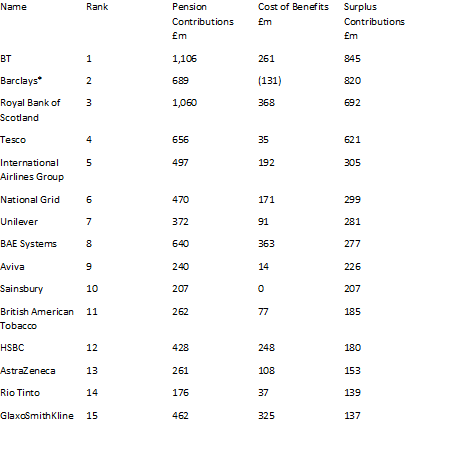 * The Cost of Benefits recognised in the income statement of the Barclays was reduced by a past service cost credit of £434million.

In total, the amount contributed to FTSE 100 company pension schemes was £13.2billion, down from £13.4 billion in the previous accounting year. This is more than the £6.9 billion cost of benefits accrued during the year. It therefore represents £6.3 billion of funding towards reducing pension scheme deficits. This is an increase on the previous year’s deficit funding of £6.1 billion.

CONFLICT OF INTEREST BETWEEN EMPLOYERS AND TRUSTEES

There is an inherent conflict of interest involved in the running of a pension scheme. The following tables aim to capture employers’ reluctance towards contributing to their pension schemes against their relative enthusiasm for declaring dividends for their shareholders.

The total disclosed pension deficit of the FTSE 100 companies was £25 billion and the total dividends paid by companies with a defined benefit pension scheme in the FTSE 100 was £68.5 billion. This compares to a deficit of £48 billion and dividends of £67 billion one year ago. In total, the amount contributed to FTSE 100 company pension schemes was £13.2 billion, down from £13.4 billion in the previous accounting year. 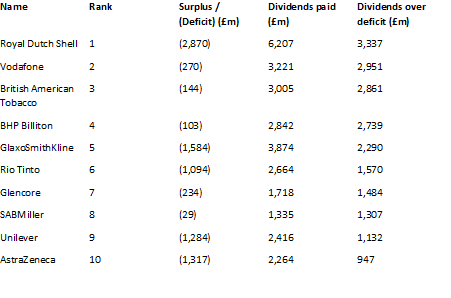 The following companies had the highest levels of pension scheme contributions relative to their dividends declared in a year. This may suggest that these companies are prioritising the financial health of their pension schemes over making returns to shareholders. 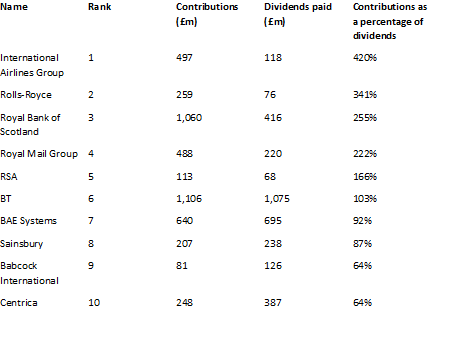 If you do have a UK pension now is the right time to be speaking to us, as specialists we can assess the current markets and advise on the best practice moving forward, with the interest rates so low currently the values are very good, BUT when the interest rates increase (Potentially twice this year) your pension value will go lower.

All the best and have a great day

All of the analysis contained in this report is based on the IAS19 numbers disclosed in a company’s most recently published annual report and accounts.

No adjustment is made for the fact that companies have applied different interpretations of IAS19 and have used different actuarial assumptions (for example, different mortality assumptions can make a significant difference to a company’s pension liabilities).